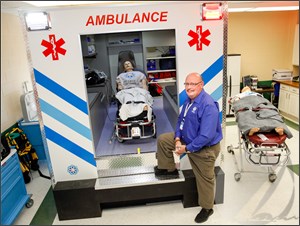 For a new paramedic or emergency medical technician, there used to be no way to gain practical experience responding to someone with a medical crisis except to do it for real, huddled with them in the back of an ambulance.

At College of The Albemarle, however, officials are hoping a new simulator can help build that experience, teaching paramedics-in-training the skills they'll need before they ever set foot in a real ambulance.

The college recently acquired a box ambulance simulator designed to mimic the real-life conditions emergency medical personnel deal with everyday in their jobs.

“It puts them more into the situation of them actually performing the task, with the confines of the area that they're in,” said Sam Mickey, COA's emergency medical services education coordinator. “It allows them to become more familiar with ambulance styles and the layout of the ambulance because most ambulances are laid out similarly.”

Mickey, former chief of the Pasquotank Rescue Squad and former occupational health and safety officer at Coast Guard Base Elizabeth City, said he began lobbying for acquisition of an ambulance simulator after he became COA's EMS education coordinator in 2012. Efforts to purchase one, however, had been ongoing at the college for seven or eight years, he said.

The equipment, which cost $50,000, was installed by Rescue Simulation Products, a Dallas area-based company, and activated last month.

Mickey said the simulator obviously isn’t equipped with a front cab and sirens, but its exterior does have flashing exterior lights like a real ambulance. That allows Mickey and other EMS instructors to shut off their classroom lights and recreate the dark conditions EMTs often have to work in out in the field. Mickey also plans to add walk-talkies to simulate the two-way radio communication inside a real ambulance.

The simulator compliments a couple of state-of-the-art mannequins already in use by EMS students at COA. The mannequins can be programmed to exhibit different distress symptoms and illnesses actual patients would be experiencing.

After the mannequin is loaded into the simulator, it can be programmed to simulate a patient who's getting better or worse, depending on the care being given, he said.

The simulator also features four interior cameras so that students standing outside can watch video of what students inside are doing. The video footage is used to evaluate students’ work inside the ambulance so that they can improve their performance, Mickey said.

Mickey said the same company that installed COA’s ambulance simulator installed one at Edgecombe Community College. But as far as he knows, the simulator at COA is the only one in use in the northeast.

Pasquotank-Camden Assistant Emergency Medical Services Director Walter Meads, an adjunct EMS trainer at COA, said he got to see the simulator used for the first time last Tuesday during a paramedic class.

Meads praised the the new equipment, calling it a great tool for quickly teaching students how to take care of patients before they ever go on an ambulance run.

“They (new emergency medical personnel) still have to do clinical time and they still have to do EMS ride time, but now we can start that simulation at the beginning and start them out in the ambulance,” he said. “You still have to have some on-the-job training, but I think every minute that they can get used to their surroundings, the better off that they are."

Currituck Fire/Emergency Medical Services Chief Chip Melton also touts the benefits of having an EMS worker who knows his way around an ambulance before stepping into a real one for the first time.

“They're going to have had some very realistic training in using that simulator that in the past they didn't have, that they were only going to get when they were in the field,” he said.