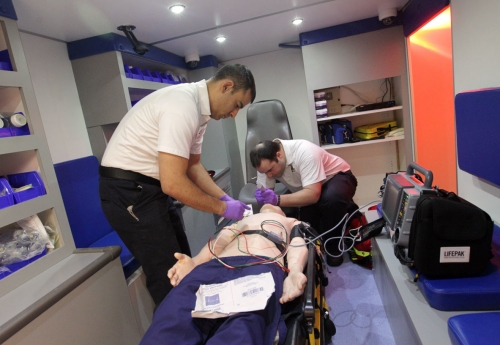 The value of a degree from a community college is very clear to Mountwest Community and Technical College graduate Courtney Cathers, of Huntington.

"All I have to do now is pass my boards, and it's off to work I go," Cathers said at Mountwest's commencement ceremony in May.

Cathers said upon her graduation she'd already been offered a job, and as of February, Cathers hard work and new degree seemed to had paid off as she was working full-time as a physical therapy assistant in Huntington, according to her Facebook page.

That's exactly the kind of results Mountwest President Keith Cotroneo knows can come of a community college education, but it's also not the most common story some think of when contemplating community colleges, especially in the Mountain State.

"I think in West Virginia, (community colleges) are not as well-known and understood as they are in the rest of the country," Cotroneo said. "In other states that have a longer history with very strong community colleges, the advantages are pretty clear. They're known, and they're understood."

"I think the citizens of West Virginia are still discovering the advantages of the community colleges in the state," Cotroneo said.

Last year, President Barack Obama announced his American College Promise initiative, which called for $60 billion to provide two years of community college for free throughout the country, saying the program would help up to 9 million students each year.

While Obama's plan has received mixed support and criticism, the Tennessee Promise, the plan on which Obama's proposal was based, was credited as the catalyst for a 24.7 percent increase in full-time freshmen at community colleges and a 20 percent increase at technical colleges in the state for the fall 2015 semester, the first semester the program was in effect, according to a report by The Tennessean.

Four-year universities in the state saw an 8.4 percent drop in the same category, according to the report.

The Tennessee Promise provides students with funding for tuition and mandatory fees, regardless of income, after other gift aid has been applied to those costs.

While it remains to be seen if the graduation rate at colleges in Tennessee increase as substantially as the initial enrollment rates, Cotroneo said he agreed with Obama's assessment that positive impact community colleges can have on the economy.

Cotroneo cited projections about job requirements in the next decade as an example.

Authors of a report from the Georgetown Center on Education and the Workforce Analysis estimated that 65 percent of all jobs in the U.S. economy will require some form of post-secondary education and some training beyond a high school diploma.

Even high school graduates who attend college but don't earn a degree can expect to make $31,495, or $2,475 more than they would with no college experience, Cotroneo said.

"To me, that's substantial," he said.

"There's a real financial advantage to getting post-secondary credentials," Cotroneo said. "With community college, you can do that in a very cost effective manner because tuition is about half of a public four-year institution, and it's substantially less than a private two-year college."

For comparison, a student taking a 12-hour course schedule at Mountwest can expect to pay between $1,988 and $5,738 in tuition and fees, depending on their program of study and residential status, according to Mountwest's website.

According to Marshall University's website an undergraduate student can plan on paying between $3,407 and $7,801 depending on their residential status. That figure did not include fees that may be associated with a given program.