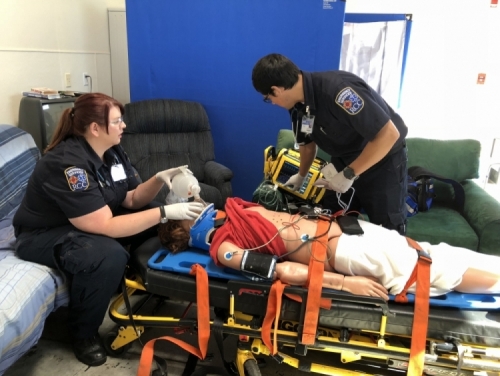 "Seems to be a minor fender-bender, but the patient is complaining about some pain," he told them as they entered the paramedicine lab to find their fellow students sitting in chairs around the room.

To achieve that level of training, the instructors use both old and new technology—and their imagination.

For their assessment last Thursday, students worked with their classmates, or "patients," as they sat in chairs meant to simulate a car seat from which the paramedics-in-training were not allowed to remove them.

When they aren't treating each other, they work on myriad dummies, the "smartest" of which is a high-fidelity simulator capable of blinking, breathing, talking and other bodily functions.

The closest thing to a living patient a medical student could want, the dummy can bleed, drool, cough, sneeze, seize and vomit. Students can listen to his abdominal sounds, his lung sounds, his heartbeat and then, based on their assessments, diagnose and treat him.

Using the correlating software, the instructors can produce appropriate responses from the simulator, based on the treatment administered by the students.

Treating the wrong symptoms with intravenous therapy, as Berndt demonstrated with the dummy, can cause a seizure.

In September 2018 the paramedicine lab received a new addition, a much larger simulator that takes up a wall of the lab. The ambulance simulator, according to Pitts, replicates the environment most of the students will be working in upon their graduation.

Outfitted with amenities of a real ambulance, the simulator gives the students a chance to practice their knowledge in a more cramped, confined space and requires them to know and organize their equipment and tools inside the "bus."

"Before we had the simulator, they were doing all their assessments on the floor. Now, we put them in the environment that they're going to be working in," Berndt said. "That's why we did this. It teaches students everything from how to load and unload a cot to take a patient out, to working a...cardiac arrest there in the back of a confined space where they would be doing it in the real world."

Another part of their training will benefit the students as they board real ambulances and have to make quick decisions about where and how to transport their patients.

Along with an initial report on the patients' status, students also receive a location for the patients and must determine which route to take and which hospital to use.

The program currently has 13 students enrolled.

Now in their second semester of core paramedicine classes, they're focusing more on trauma and serious injuries, according to Kate Barnhart, 28.

"It's all pretty interesting because you're constantly learning new stuff on a daily basis," she said. "Not every person is the same, so you learn how to work with your circumstances and work with people who are more experienced."

Tim Olson, 59, of Plains, is wrapping up his teaching career at the Salish Kootenai College and transitioning into retirement. Olson went through FVCC's EMT program two summers ago and shortly after that began volunteering with the Plains Community Ambulance.

"Once I really started working in the field, It really got attractive to me to improve my medical assessment knowledge to be more effective on scene with a patient," Olson said.

Because Plains currently has no certified paramedics available, they've had to rely on EMTs and nurses or doctors to staff their ambulance, Olson said. While EMTs can perform basic medical and pre-hospital care, more advanced life-saving and life-sustaining procedures, such as defibrillation, severe pain management or resuscitation, requires a paramedic.

Now a student of the college's paramedicine program, Olson intends to increase the time he spends volunteering with his paramedic certification once he enters full-time retirement.​

Attached to the lab are two rooms set up to simulate a living room and a bedroom, where students must interact with their surroundings and "patients" in a situation they'll become familiar with when they enter the field. Since restructuring the rooms to look like a home instead of the hospital rooms they resembled before, Pitts said he's seen a significant change in student interaction.

"Simulations are hard because it's not real-world, but the closer we can get it to the real world the better," he said. "Now having a living room to work at, the ambulance, we've just seen their engagement in the simulations increase tremendously."

This summer, the paramedicine students will leave their simulations behind and step onto real ambulances and into emergency rooms around the region for their clinical experiences.

They'll begin learning how to cope with the high-stress nature of their chosen careers as well as the mental and emotional trauma that comes with it. The technology, environment and instruction in the paramedicine lab at FVCC combine to produce the next generation of life-savers in the Flathead Valley and beyond.

Applications for FVCC's paramedicine lab program open up this month, but all students must have completed their EMT training prior to starting the class. For more information about the program, visit https://www.fvcc.edu/programs/health-care/paramedicine/.